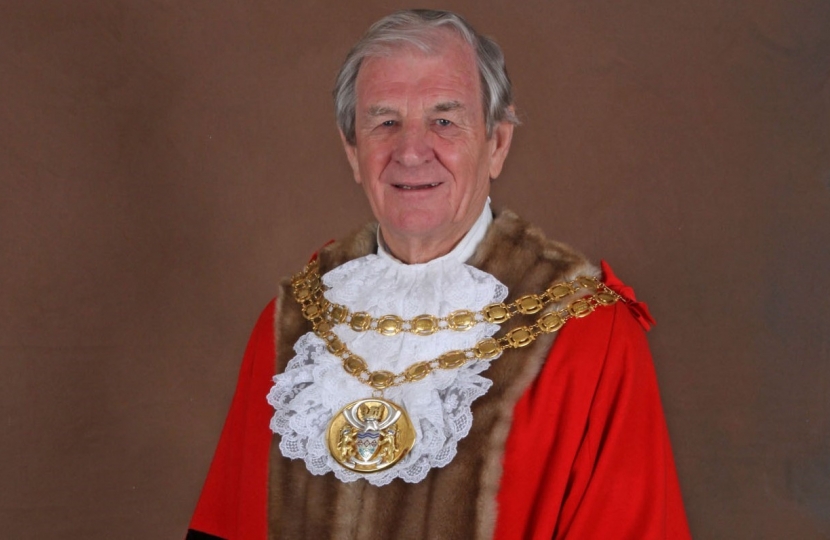 Councillors in South Ribble have paid tribute to a former Mayor and former Deputy Council Leader who has passed away aged 80.

Councillor Colin Clark was rushed to hospital unexpectedly on Tuesday 2 March following a heart attack but despite getting his heart restarted, Councillor Clark did not regain consciousness and died in the evening of Thursday 4 March surrounded by his wife, Margaret, and their children, Helen and Stephen.

Mayor of South Ribble from 2012 to 2013, Councillor Clark was a vastly experienced local councillor – representing the Longton and Hutton West ward on South Ribble Borough Council from 1997 to the present day in 2021, where he was still a councillor.

Born in Ulverston, Cumbria, on 23 January 1941, Colin Clark later moved to Preston, aged 14, and attended Preston Grammar School. His professional career began as a scientist at the UK Atomic Energy Authority at Springfields in Salwick near Preston. After that, he spent 30 years in senior management positions in the water and environmental services sectors before he retired aged 52 from his position at South West Water. He leaves behind wife Margaret, two children Helen and Stephen, seven grandchildren and six great-grandchildren.

“It is with deep sadness that I write this tribute to our friend and colleague Colin. He was a very loyal, and hard-working member of our Conservative group.

“He first joined the council in 1997 and has represented the ward of Longton and Hutton West for over 23 years.

“Colin was very professional in his approach; he would do his research and he liked to drill down into reports. Most of all, he liked all the i’s dotted and the t’s crossed and things done in a professional and considered way.

“He was very proud to represent his ward and was always pleased to be re-elected with a huge majority.

“Colin was very conscientious at attending meetings and his contribution was greatly valued.

“One of his proudest achievements was the implementation of the shared service at the council which saved the taxpayer millions of pounds over the years.

“He was also especially proud in 2012 to be elected as Mayor of the Borough with his wife Margaret as mayoress by his side.

“The Conservative group will miss him greatly and South Ribble Borough Council will be a poorer place without him. Our thoughts and prayers go out to Margaret and his family at this very sad time.”

The funeral was held at 2pm on Thursday 18 March at St Michael’s Church, Hoole. The cremation at Charnock Richard Crematorium followed straight afterwards. Donations in Colin’s memory can be made to St Catherine’s Hospice in Lostock Hall by visiting https://www.stcatherines.co.uk/support-us/donate/.

Colin had many passions, not least sports. He loved rugby, cricket and football in particular but also enjoyed golf and skiing. But he would watch any and all sports happily. He was a big Liverpool FC supporter and the Liverpool anthem, ‘You’ll Never Walk Alone’, will be played as the family enter the crematorium next week

Colin also loved doing DIY projects. He hated the idea of getting anyone else in to do a job that he could easily put his hand to – so that is what he always did!

Colin retired from South West Water aged 52 but was in no mind to relax and take it easy. Between his retirement and right up to the day of his death, Colin was involved with a great number of organisations. Here are some of the things he was involved in from 1993 onwards:

Colin was an external moderator for the NCFE examinations board

Colin was a very active member of the Masonic Society

Colin was a member of the Health and Care Professions Council which looks after the interests of certain roles in the healthcare services (excluding nurses and doctors) such as paramedics, dieticians, physiotherapists, speech and language therapists and many more (see full list here) and Colin was an active member of this right up until his death

Another thing Colin was involved in right up until last week: He continued to sit on mental health tribunals which covered various mental health hospitals in the region

And finally, Colin was still actively completing school appeals for the Blackburn diocese and he was an assessor of schools too

Colin Clark was an experienced, knowledgeable, intensely passionate man – a true gentleman, too – and everyone at South Ribble Borough Council pays our respects to his life and his accomplishments. May he rest in peace.