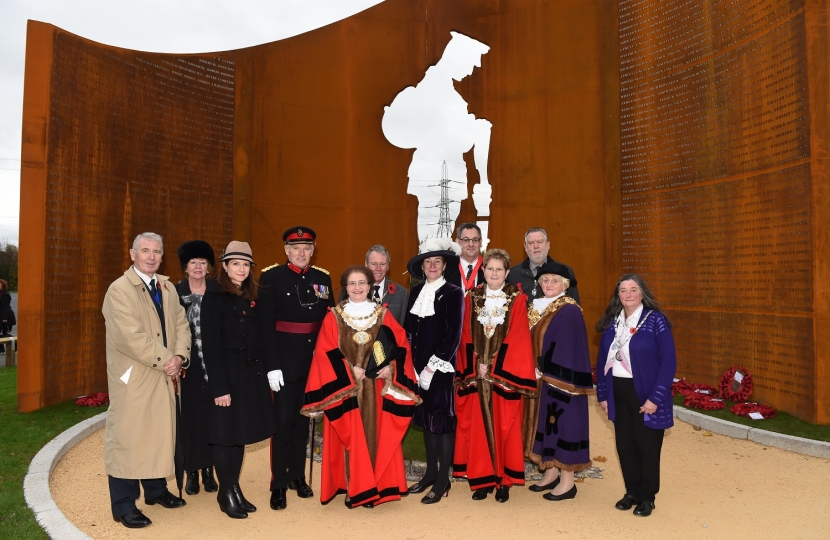 A STUNNING tribute to South Ribble’s fallen heroes has been officially unveiled.

The new war memorial in Lostock Hall, which remembers 686 men who died serving their country in the Great War, was dedicated in a moving ceremony on Armistice Day. The service was attended by families of the men and some of Lancashire’s highest-ranking dignitaries. Led by Mayor of South Ribble Councillor Mary Green, the service included readings by Vice Lord Lieutenant of Lancashire Colonel Alan Jolley and Wellfield High School head girl Chloe Juniper, as well as a number of hymns.

Wreaths were laid and bugler Darryl Cartwright from the Royal British Legion played the last post. The poignant ceremony was brought to a close by the City of Preston Pipes and Drums. “The service was incredibly humbling,” said Mayor of South Ribble Councillor Mary Green.

“These men made the ultimate sacrifice for their country and it was wonderful to see civic leaders from across the county coming together and paying their respects. We wanted to create the best memorial ever. The public have already taken this wonderful memorial to their hearts and I very much hope it becomes a South Ribble landmark.”

Standing at 40ft tall near to the Stanifield Lane roundabout, the monument will serve as a poignant reminder of the ultimate sacrifice that the brave men and their families made for our freedom.

Although more than 50 separate war memorials exist around the borough, the new monument is the first borough-wide memorial. The research into the names was carried out by local historian Charlie O’Donnell, who has spent the last 18 months trawling through military records, archives and old photographs to trace the men.

“The sacrifice these men and their families made during the war is absolutely massive. There’s not one family in the borough that wasn’t touched during that period,” said Charlie, of Bamber Bridge.

“This will be the first time these men’s names will be gathered all in one place and it’s so important that they are. Local people can see their ancestors being remembered and pass on their stories to the younger generation.”

The memorial, designed by South Ribble Borough Council officers in collaboration with design and fabrication company DP Structures in Nelson, was craned into place and welded together on-site earlier this month.

It is made of a thick steel alloy with a rusted appearance and has a cut-out silhouette of a soldier with head bowed, a large poppy, and the word ‘remember’ inscribed upon it.

Inscribed inside, visible to those standing in the peace garden behind the memorial, are the names of the soldiers, including Bamber Bridge’s Corporal John McNamara, who was awarded the Victoria Cross.

The memorial will provide a lasting reminder of the sacrifices made by South Ribble men and their families.

She said: “This memorial is incredibly important for the people of South Ribble, especially for those of us whose relatives are remembered here as it gives us a place to visit. Young people can see this memorial and appreciate the sacrifice these men made. It is very poignant.”

The memorial and peace garden will form part of the greater St Catherine’s Park, due to be opened to the public in summer 2016, in a joint project between South Ribble Borough Council and St Catherine’s Hospice.

Stephen Greenhalgh, Chief Executive of St Catherine’s Hospice, said: “St Catherine's Hospice has been inspired by local people for local people and, over the last 30 years, has become a symbol of what can be achieved when we come together to help those who need us. This WW1 memorial project epitomises our remembrance of the ultimate sacrifice that so many made a century ago, and re-enforces our commitment to stand alongside each other in times of need.”